Gliding - The Purest Form Of Flying 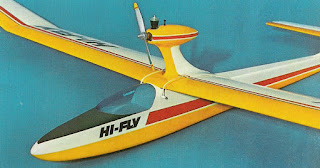 Back in 1978, we were living in Tsumeb in Namibia where I was working for the mine. This was where I discovered the purest form of flying. It was by accident, but I didn't know it at the time.

Our house was situated two blocks from the local airfield that belonged to the mine. Every so often a roaring could be heard when the company plane approached for landing or prepared for take-off. I always loved planes and the noise never bothered me. I usually went outside to watch.

I'm not sure how it happened but I decided to visit the airfield and discovered that there was a model radio control flying club right next to the main runway. One of the members suggested that I order a kit from Cape Town if I wanted to join. I decided to leave things in his hands and a few weeks later my first radio controlled glider arrived.

It took me quite a while to build the glider and it turned out looking fine. My new friend provided the radio control equipment and the day arrived when we met at the field for the first flight. He powered up the little motor (also his) attached to a pylon above the glider and steered my glider into the warm afternoon sky. I was delighted to see my creation fly.

Then Hans handed me the transmitter box so that he could teach me how to fly the model. A week or two after that he told me to land the plane on my own - dead stick, of course. The motor only lasted until I reached high enough and then cut out when the fuel ran out. To my delight, I managed to land the glider almost right in front of me.

One day the guys decided to have fun and my glider was towed up by a chap on a motorcycle. We had a great time. As I was flying around I saw my glider suddenly rise higher as if an invisible hand had lifted it. I thought nothing of it and landed.

A year later we moved back to Johannesburg. One day I noticed some model gliders in the air and drove closer to have a look. It was magnificent seeing gliders being launched high into the air by winches. Needless to say, I soon learned about that invisible hand that stopped my glider from losing height but lifted it higher. It was actually called a thermal. Wow, you live and you learn.

During this time I became totally hooked on the hobby and joined the club. I had made new friends and we flew every weekend. Since I needed one of those super-efficient gliders I was introduced to Ken Findlay who imported the finest gliders and owned a radio control model shop in Johannesburg.

We became friends and he taught me a lot about the hobby. From building to covering and installing radio control gear in my gliders. When something new arrived we always used to chat about the best airfoils and accessories. I grew to like him a lot because he was a wealth of knowledge and inspiration. What I bought from him made me look good and took my abilities to the next level.

The time came for him to emigrate to America and I experienced a huge vacuum in my life. When I visited model shops and tried to discuss airfoil sections and things like that I was met with blank expressions from the salesmen. They just weren't on the same level as Ken. So all I have is fond memories. He was a true friend.

We only recently reconnected on Facebook. So this article is to honor him. By the way, a thermal is warm air rising from the ground where the sun has heated up the ground. The thermal usually starts as a narrow column of air which grows wider as the warm air reaches higher into the sky. Gliders make use of these thermals to stay aloft just like eagles, hawks, vultures and other birds manage to fly without flapping their wings. This is the purest form of flying - imitating those majestic eagles and vultures.

Once you start flying like that you experience something special. Thanks, Ken, for sharing so much of your knowledge and friendship with me. You are sorely missed here in sunny South Africa. I continue to enjoy gliding, the purest form of flying, this side of the globe. Always thinking of you.
gliders gliding radio control flying