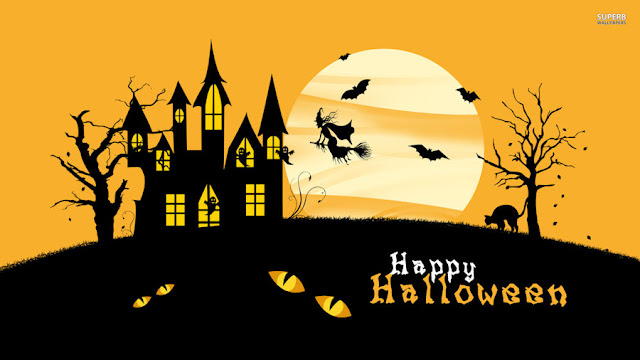 I'm not a fan of Halloween and had to go and read up on it to find what it's all about. I've watched some scary movies and have been scared out of my wits. Some Halloween costumes give me the creeps.

Reading up on it I have discovered that Halloween falls on Monday 31st October and is believed to have originated in the Celtic fringes of Britain, and was adapted by Christian traditions, immigrants' conventions and an insatiable desire for sweets (The Telegraph). "Gaels believed that it was a time when the walls between our world and the next became thin and porous, allowing spirits to pass through, come back to life on the day and damage their crops." - quoted from the aforementioned article. That article is quite interesting.

Back to my story. Well, last night we had an enormous storm. Lightning and thunder raged as in the heaven above and the rain came pelting down drenching the earth and frightening dogs and people alike. It made me think of a time when I was competing in a mountain bike race and had to ride past a cemetery on a wet and dark night - read more about that in "There Be A Bad Moon Out Tonight!" and "There Be A Bad Moon Out Tonight Part 2."

First, the lightning knocked out our power with a loud clap, then a second crack followed that and our WiFi router got fried. We just endured the thunderous commotion until it was over and fell asleep. This morning we discovered that we had no Internet and the router was dead! It felt as if Halloween had come early this year and the bad spirits had hit our beloved connection to the Internet. We can't function without the connection and when it does happen it causes major havoc in our lives since that's where I do most of my work.

After reporting a dead phone line and no Internet to Telkom, our ISP, we went to one of their nearby stores and was referred to another store because they had no routers in stock. At Telkom in Greenstone, we were told that we had to upgrade to a new device and chose that option since they wouldn't exchange the old router for a new one. Back at home, I was able to configure the Internet on our new connection without help from Telkom - the first time I got this right. So we didn't have to phone their helpline for assistance.

Speaking of riding a mountain bike I went for a glorious ride after supper to destress. Tonight the heavens are quiet and it's not quite Halloween just yet. Let the ghouls, witches, bats, and zombies rest in peace because we managed to spend almost the whole day getting our ADSL connection sorted out. We were treated very well by the Telkom staff at Greenstone Mall in Edenvale and prefer to go straight there from now on.

Good night and enjoy your Halloween on Monday!
halloween Internet mountain bike riding rain telkom there be a bad moon out tonight