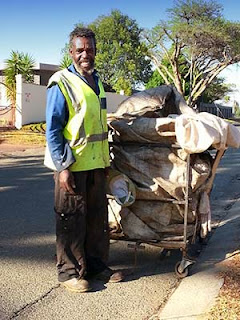 As we mounted our mountain bikes early this morning to set a positive tone for the day I spied a man with a makeshift trolley down one road to my right. A few seconds later I decided to make a u-turn and head in his direction. I stopped next to him and saw the worried look on his face – he probably thought I was going to complain about what he was doing. Setting his mind at rest I boldly said that I wanted to photograph him and then I asked him about his work.

Stoney is a collector of plastics and other recyclable waste materials and hails from the other side of Esselen Park near Tembisa. From this I deduced that he dwells in a squatter village next to the railway line. I enquired how much he earns for his load of plastic materials and he told me that it usually is twenty rand. Can you imagine trying to live off R 20.00 a day? That’s like $2. What a humbling experience it was talking to this man. Here is someone doing an excellent job of helping recycle the world, scraping together a meager existence covering great distances for such a small reward without complaining. He even gave me a big smile when I took his photo. As we rode away Maggie said I made him feel very important and made his day. On the contrary, I felt humble talking to him because he has so little yet appeared so content. 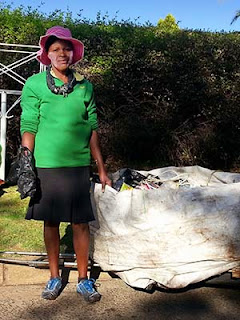 We rode on and found someone else doing the same thing, recovering recyclable waste from the plastic bags of rubbish outside peoples’ homes. Her name was Lira, who also chatted to me without any complaints. She had her waste divided into compartments of plastic, paper and glass - more organised. She probably didn't want to miss out on the few extra cents she could get for those items.

Nowadays we need to recycle because the earth’s resources aren't unlimited, although we sometimes carry on living as if that is the case. I found a pamphlet on the subject encouraging us to recycle. When we recycle it keeps our environment clean, turning waste into something useful and reduces litter and pollution. People like Stoney and Lira can at least make a few bucks with their valiant efforts.

When I returned home I found Stoney nearby and told him he could collect his photo tomorrow - I'll probably have another surprise for him too. Cycling is not always about riding a bicycle, but noticing the people who cross your path and how you treat them.
cycling