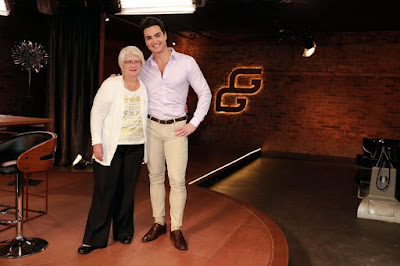 In 2016 my wife, Maggie, contacted our famous Glam Guru, Hannon Bothma, via Facebook for a makeover.
Not a word of reply came back and it seemed as though her dream had melted away like a morning mist.

But, lo and behold, on 21 April this year Maggie received the shocking news that her father had passed away. On the very same day, she also received an email inviting her for an interview with the Glam Guru himself. Obviously, she was grieving over the loss of her father - we had spoken to him a few days earlier in hospital - then the surprise came that she was to be interviewed by Hannon.

We arrived at his smart building quite early and found the reception area filled with women candidates. Maggie was given number 21 and told to sit down. She chose a comfortable, white couch at the other end where we had an excellent view of the others. Almost everyone was tense with anticipation and spoke in hushed tones to bide the time.

An assistant appeared and announced that everyone without a number should go and wait outside. Hannon was going to start with the interviews.

After what seemed like a long wait Maggie came outside and told me to accompany her to the studio. Quite surprised I met a smiling Hannon and was told that I could take a photo of him and Maggie. Well, that was very nice of him I thought.

So I left with a very happy wife and treated her to a delightful lunch at the Ocean Basket. Maggie was one of the 12 finalists out of 30 women interviewed. She had passed a series of three interviews to qualify. That was on 8th May.

Over a month has passed since that exciting day and Maggie has systematically spring cleaned the whole house. We've painted the front gate and burglar bars and gate at the entrance. We also replaced some windows as well as the old post box outside our front gate - a valuable suggestion from a dear friend of Maggie's. All this because on Monday 12th June Hannon will be arriving at our home with his TV crew to do a live interview with Maggie.

Can you imagine how she must feel? The famous Glam Guru in her home - someone she has been watching for years on the TV. Quite an event for my lady.

How do I feel about that? She deserves the attention because she has always been modest, loving and supportive of others -  altogether unselfish. She is really looking forward to being pampered and made even lovelier than she is by Hannon and his makeover team.