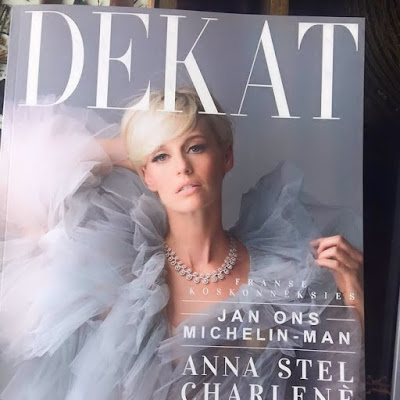 This is my testimony of years and years of hard work. So for the last two years, I have dedicated myself to something else I dreamed about since 6 years old. I never as a child wanted to be anything else than an actress. I lived and breathed that dream (kind of) into reality. I was raised in a small town called Sannieshof and I always wanted to move to a big city. I never dreamed of Hollywood but I wanted to be an actress telling South African stories. As a 19-year-old, I gave up my studies in Potchefstroom and moved to Italy (my second flight in my life ever and my first flight was alone to America).

I began working as a model. It was lonely and I was not happy and decided to come back to South Africa. I packed up my things moved to Johannesburg and met a woman that truly changed my life Hilary Pace. She taught me what it is to be a strong woman in this industry. How to run a business and not take a lot of bullying in this industry. I met a kind man called Bobby Heany who opened my world to acting and Henrietta Gryffenberg who cast me in one of my very first acting roles.

The years went on and out of desperation to survive in an industry I started working behind the scenes. Katinka Heyns gave me my very first opportunity to work as a wardrobe assistant where I found my love for film. I moved from modelling and met Jennis J Williamson who taught me integrity and self-worth.

I worked harder and my husband Niel Van Deventer gave me the strength to accept a job as a continuity and script supervisor. He pushed me to look beyond simply surviving but together we could start creating the type of work we wanted to do. I wrote a Film script 8 years ago never wanting to direct it. I was too scared as I did not study any of these things I am doing today.

How dare I try to tackle this as I am not good enough? I wanted to act. That’s all.

Niel and I together with a star team and superwoman Sara Blecher made a film called “Dis ek, Anna.” The film did well but once again the baby monster “Palama Productions” needed more and more to survive so we started the television department. And so directing and camera operating became part of the list of things I needed to learn to survive.

It has been a massive journey full of ups and downs. I have been working in this industry from 19 years old and being a female in a male-dominated world is something else. #metoo struck me down as I thought these things only happened to me. But through the strength of all these great people, I learned how to stay solid as a rock.

I am so grateful to all the kind people (male and female) I have met in this industry and the knowledge I could learn from them. #metoo but I am stronger. To my model friends: I know what happens and what you have been through. To my actress friends: I know every aspect and know how hard it can be. To my fellow female crew and female directors and producers...I know. It will change when we have the courage to say “Enough is enough” “I will not be spoken to in this way” “You have no right to touch me...ever!” “What I wear has no value to my work.”

I am stronger and for this, I stand proudly today. I am moving forward and saying I am good enough.

I will soon be directing my second and third Feature Documentary and will move on and hopefully one day I will have the courage to direct my own script. One of the most valuable advice I received in my life is:
“You have the right to change your mind and to change your mind constantly...it’s called being human.”

Thank you to all the exceptionally kind and talented people I have met in my life!
#metoo #payingmydues #palamaproductions #femaledirector #hardwork#hanginthere #believeinyourdreams.

Today I came across this story and asked if I could add it to an article on my blog. An inspiring story needs to be shared especially one like this. I believe the ladder to success is often very steep and long. Not many are brave enough to accept the challenge and press on until they reach the clouds. Thank you, Charlenè Brouwer, for sharing your story with us.
From Facebook, (my favourite hangout).
Charlenè Brouwer Charlenè Brouwer | Living Her Dream female directors Palama Productions