Morning Walks in my Neighbourhood 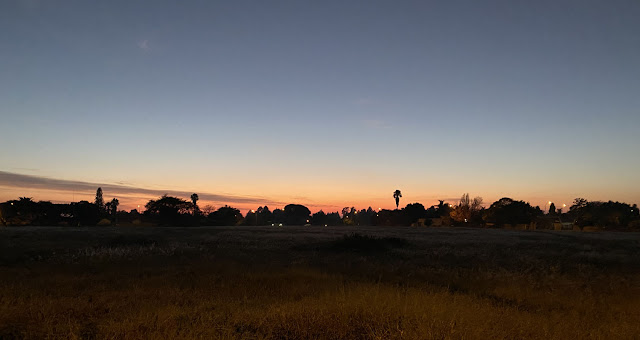 Yes, I have changed the name of my article. It is day 4 after skipping a day due to unforeseen circumstances. This photograph looks darker because the mornings are getting longer due to winter. This morning we started at 6 am sharp while it was still dark.

The only remarkable thing to report is that we actually went for the walk. We took a different route again and didn't encounter anybody else that was exercising. Maybe it was too early. The distance was 1.95 km - nothing spectacular. But if you add it up over time it is still far better than doing nothing at all.

A morning walk or ride on a bicycle is very beneficial to ones health. The reason why we are walking and not riding is because Maggie doesn't have a bicycle at the moment. Walking is the next best thing until she gets a bicycle again. With a bicycle it is easier to travel greater distances faster and you get to experience more than when you are just walking. Ultimately, we are feeling a lot healthier and better than when we just stayed at home without exercising.

Lately, there is more traffic and more people walking to work than before because they have eased the lockdown restrictions slightly. There's a lot of who-ha going on around the ban on cigarettes and alcohol in the country. People are involved in a lot of political in-fighting and the unity the started around fighting a common enemy, which is a virus, is being eroded away by differences of opinions.

I know that when they showed scenes from Italy and Germany where people were united around singing it looked so good and romantic and appealing. But somehow the human side comes into play here in South Africa and true characters surface and the ideal dream of a rainbow nation is not looking so bright anymore. The old motto of, "unity is strength" is gone. There are too many self-centered  people to make that happen.

The other day I was reading my bible and I noticed something extraordinary. The Book of Isaiah has beautiful verses in it if you look for them. Also, wonderful prophecies and scriptures of faith. The very last word in that book, however, is the word "horror." Something to think about. That's what you get when people are not living right - disunity!