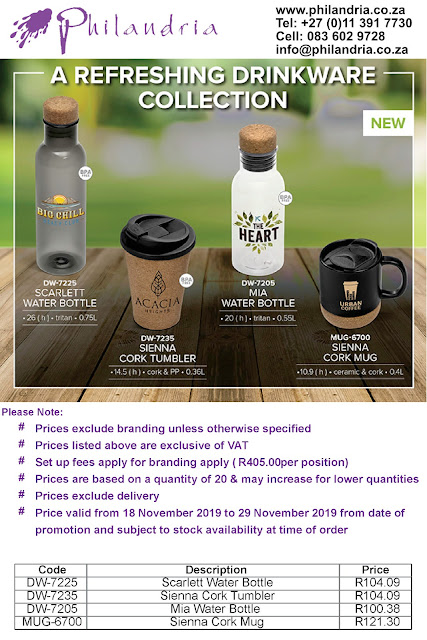 Very pretty mug, tumbler and two water bottles are now on promotion at Philandria, the company I promoted two weeks ago in an article. These items are nice giveaways for companies that want to promote their brands.

Often, when I attend training seminars I get spoiled with similar items. They are always handy and a reminder of they events I attended. We recently had to do some photography for a creche and needed to take some sandwiches and hot tea along for when we were at the event. Guess what? My wife remembered that we had two lovely Neurolink flasks that we could use. So I decided to do a little trip into the past (on my blog) and found this.

This article is from 8th June 2014 when I was still relatively new to blogging. It focused on the cold. I decided to share it now since we recently witnessed the total eclipse of the moon.

The Sun, like an angry king, occupies center stage in our Solar System with glorious pomp. Gigantic flares periodically gush outwards from its massive diameter of 1 392 684 km comprising hydrogen and helium. Even this majestic ball of fire isn't stationary but moves within the Milky Way.

At various distances planets dance in orbits around the sun. Mercury and Venus are the closest and bear the brunt of its nuclear fury. But they are not the subject of our attention for now.

At about 150 000 km, the Third Rock from the Sun, we find an awesome planet called Earth. Graced with continents, oceans and an atmosphere Mother Earth is home to life in all its glory. This jewel of a planet is 190 times smaller than the sun and races through the darkness of space at the lightning speed of 30 km per second. This is fast enough to go around the world in seven minutes or to the moon in four hours. Enough to make you want to grab onto something for safety, but we are blissfully unaware of this.

It was in the middle of a cold winter when I wrote it.

What this cold does is make me appreciate the sun and planet earth. I am thankful for what I have and look forward to Spring-time. Maybe I'll try some brain fitness exercises right where I am sitting. That way I won't get too cold because I will be busy doing something useful keeping brain fit - https://neurolink.company/cms/

Just think about this. You order some of the items above and they will come in handy for some people in the future and you will be promoting your company at the same time. Philandria is the company to order from.