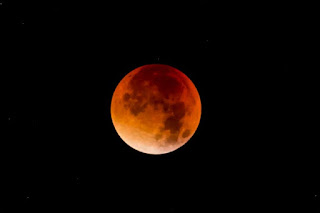 Everyone is hyped up about the biggest lunar eclipse of the century. Those of us who were able to witness this unusual spectacle were awestruck by this unusual phenomenon. It was cool, as the younger generation put it.

In ancient times there might have been rituals and sacrifices accompanying the event among the moon worshippers. Chaldeans had many gods and the moon was one of them.

No wonder we still add phrases like blood moon to our description of this lunar eclipse. Just Google the subject and you get tons of information like "The blood moon prophecy was a series of apocalyptic beliefs promoted by Christian ministers."

But I remember my own blog posts of 2013 when I used "There be a bad moon out tonight." It wasn't anything bad at all. I was just adding some fun to my stories. Here are my stories:

With all the excitement of yesterday, we were really looking forward to another wonderful, sunny day, but it never happened because a chill came along carried by the wings of the wind turning our efforts into a struggle against the elements. We took the good with the bad and accepted the challenge. After all, that's what cycling is all about.

We've experienced a lot worse during our 24-hour race in Parys where I endured a power failure on the LED headlight I had borrowed from Sean, my son-in-law whilst riding in a thick forest of trees in the pitch dark with the pale moon hidden behind clouds of rain - sounds scary, hey? I could just about visualize the gremlins ready to pounce on this lonesome rider and almost saw their beady little eyes sizing me up from those dark corners. That was after I made my way past the gloomy graveyard where the lights played tricks with my mind and I almost landed in an open tomb. Most of the time you ride alone in the wet, dark night all shivering and shaking - from the elements and what you imagine is waiting for you around the very next corner.

Who said that cycling is boring. There be danger and scary things out there, laddie! Whooooooooooooooo.

What happened next? The weak headlamp mounted on my helmet would have to do as I entered the dark, wet forest as I felt lost and alone. The silence hung in the air like the whole world had stopped to watch my next move with baited breath – only being broken by the wheels beneath me crunching on the damp earth.

As I piloted my bike along the winding track through the undergrowth I was confronted by an awesome spectacle which cannot be described by mere words. Maybe the invisible beings lurking in the darkness had pity on me for I was treated to the most unusual sight I have ever seen. A night-time garden scene like the movie Avatar seemed to play itself out before my eyes. The light on my helmet burst in all directions off the wet leaves in that forest in a surreal way, glowing with fluorescent brilliance – a virtual magical spectacle. My spirit lifted immediately giving me new strength to get the hell out of there. It felt as if I had been given a head start before those imaginary creatures would pounce.

Within the space of a hundred heartbeats, I finally emerged from the darkness of the undergrowth into the moonlight which had come out of hiding behind the heavy clouds. Fortunately, I had done the course in the daylight and knew that there was still about three kilometers of darkness and loneliness left and then I would be home and dry.