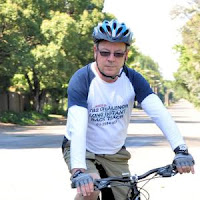 Here is a "reality show" look at the start of my Human Rights Day on 21 March 2017. No, I'm not attending some mass rally. It's far too crowded and I love to do my own thing and relax when I get the chance.

I woke up at 4 a.m. and made myself a cup of hot tea and settled into my lazy boy chair to read my new ESV bible. The passage I read was about the martyr Stephen who was stoned for speaking his mind. The amazing thing was that he gazed into heaven and saw Jesus standing at the right hand of God. What an experience that must have been. All I can say about that is that there certainly has to be another dimension that we are not always aware of and don't see.

When I started this blog I decided to name it New Dimensions because of the many subjects I would be writing about. New dimensions also refer to many new experiences I would be having and write about.

So far I've reported on things like wanting to scuba dive and then being invited to a scuba diving lesson where I had that experience first hand - something I had not planned. Then I also received a Top 25 Most Popular Award for promoting one of my clients. That was also a complete surprise. After driving past an accounting firm many times and thinking that I should stop there one day and introduce myself, I saw a guy walking to his car the other day and greeted him. I told him that I create websites and spread the word about my clients on the Internet. He invited me to come and see the very same company of accountants that I had driven past countless times.

Recently I was looking at how video can improve the user experience for visitors to your blog, social media or website and was thinking about how I should be doing that. What happened next was another surprise. One of my clients asked me if I was available on Saturday to accompany her to Hartebeespoort to take some photos. She also asked if I was able to shoot some video footage. I decided to leap into this new dimension even though it was somewhat of a challenge for me - doing the video.

Shooting video isn't completely new to me since I've done that before, but then I used a video camera. My old video camera doesn't work anymore. So I had to resort to shooting with my Canon EOS 700D camera, not knowing what the results would be like.

Saturday arrived and we pitched up at the client's house and expected to be transported by Uber to our destination. Unexpectedly I was handed the keys to her very expensive Mercedes Benz CLA 350 and told to transport two family members to Hartebeespoort. The ride was very comfortable with the car's air suspension. The house where I was to do my work was modern and massive and situated in a new housing complex named Xanadu - a very exclusive place.

After taking many photos with my old Nikon D90 I switched to my smaller Canon 700D and did the video. Just as well I made that choice because I ended up filming for about one hour and ten minutes without a tripod and my arms and back were sore because of the tension and holding the camera dead still for that long.

Afterward, we traveled to Monte Casino for supper at Billy G's in the same luxury car. Then off to the client's house to drop off the two passengers and returned home all hyped up with adrenalin and excitement I struggled to fall asleep - it was after 11 p.m. Needless to say I still had to learn how to edit the video footage and burn it to DVD for her. I can proudly report that she was satisfied and I received an extra bonus for good work.

These are just a few experiences that I wanted to highlight to show why I named this blog New Dimensions. Unexpected things happen when you least expect them. I have learned that when I dream of doing something new it can come true. Many times things I dream of getting come to me without me making it happen. It's almost like when I think of doing something it's actually a sort of message to me that the thing I desire is going to happen - a message in advance.

Recently I have been eyeing a new camera because I have been getting photographic assignments and video as well. What I have isn't really ideal for the jobs and I find myself overloaded with keeping up when changing camera settings all the time in challenging situations. The camera is slow and outdated. Well, another dream is about to come true. Next week I will get the photographic gear that will be a real game-changer for me.

I started doing photography 38 years ago and never had anything as good as what I will be getting next week. That is another story and I will write about it at another time. So back to my Human Rights Day story.

As soon as the sun was up I jumped on my bicycle (mtb) and went for an early morning ride. When I reached the point where I usually turn and ride back I decided to ride to my son's house and say hello. Along the way, I greeted every passerby as friendly as possible and a few responded with equal enthusiasm. When I arrived at my son's house his dog kicked up a huge racket and my son eventually emerged - I probably woke him up since it was only 6:30 a.m.

All I said to him was that I came around to tell him that I love him. Because he was not quite awake he responded by saying "Good morning." I left and rode back home and it was uphill most of the way.

At home, my wife had just gotten up and was brushing her teeth. I put on the kettle and made coffee for us. It usually is a cup of aroma rich Jacobs Krönung coffee with a topping of milk foam - my special treat. We enjoyed a hearty bacon and eggs breakfast I I have been writing this blog post ever since then.

Well, folks, this is how I have been spending my morning. It's about an hour or so before midday and I will be reading more emails and interesting things. I hope this has been a good Human Rights Day for all of you. Remember, what you think about is important. Good thoughts, hey! Thanks for reading.
cycling hartebeespoort human rights day 2017 photography video