The Moon Made Me Do It! 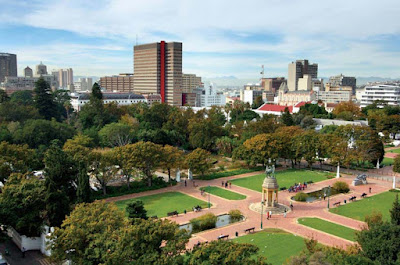 I remember a glorious afternoon in the park with friends. I was eight years old and living in Cape town a block away from the Gardens. My family lived in a flat opposite a small hotel where we witnessed drunken fights almost every Friday night when the locals had too much to drink.

My friends lived down the road in a lovely red brick house and that afternoon we were playing on the beautifully manicured lawns as monuments of old heroes watched on in silence.

With a brisk run and a mighty heave, I flung my chuck glider into the air and watched with delight as it arced up higher and higher then settled into a graceful glide back to earth. This was so much fun that I was unaware of the soccer game my friends were having on the next field, then they called me to join in.

Being young and energetic I soon became enwrapped in the fun running here there and everywhere chasing the ball. We were having so much fun that we hardly noticed that it had gotten dark and the park lights came on. We were having lots of fun.

A bit later an older guy decided to join us and we didn't think it was out of the ordinary. By then it had become cloudy and very dark with the only light coming from the lamp posts around the field.

The adult, dressed in black, had the ball and I was chasing him and the ball. He was bigger and faster than me and try as I may he was one step ahead of me. As we contested for the ball I saw an object fall to the ground in the dark but paid no attention to it at that moment since I was trying my best to get the ball away from him. He was stronger and faster so I eventually gave up to catch my breath.

So I walked back to my position and then I caught a glimpse of something lying on the ground and moved closer and thought it must have been the thing that the guy had lost while we were kicking the ball around a few moments earlier. I couldn't make out what it was as I walked up to it, but then the moon appeared from behind the clouds and I saw the metal object coming into view.

At that stage, I was alone since the game had moved to the other side of the field. As I got closer to the strange object that had fallen from the older guy's jacket the moon seemed to shine brighter revealing a gun lying on the ground. To an eight-year-old like me, that was a huge shock and it spelt danger with a capital D.

Keeping my wits about me I discreetly went up to my friends and said to them, "This guy's carrying a gun and he dropped it over there." Obviously, I didn't want to alert the older guy so I told them to leave quickly and say that we had to go home.

Out of breath, we reached the safety of their home in double time. With much excitement and relief, we decided that we had enough fun for the day.

As a kid, I was scared out of my wits of guys with guns and the shock of seeing a real weapon like that for the first time frightened the living daylights out of me. All I can say is the moon made me do it - I ran at the sight of danger but made sure that my friends were safe too.