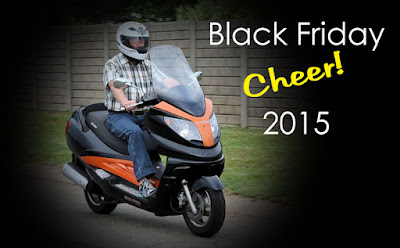 So here we are on Black Friday - something I had no knowledge about until I Googled it. Yesterday I was doing the rounds visiting some clients when my scooter suddenly cut out under me. This was far from home. What to do?

I lifted up the seat to access the battery where the fuse was questionable in the past, but I had forgotten to keep the screwdriver in the bike for emergencies. Slowly pushing the bike (like paddling) whilst sitting on it I continued with the road I was on, my mind trying to come up with a solution to my predicament. From previous posts you will see that this bike was a tricky lady and the mechanics that worked on her were not the best. They usually made all sorts of claims about how good they were but never delivered 100% on their promises.

Anyway, continuing down the road I stopped opposite a small business operating from a home - they fix things like industrial polishers and floor scrubbers. I explained my predicament to the owner and he delegated the job of assisting me to a younger dude who pulled weird faces at this prospect. With screwdrivers in hand he followed me to the injured lady (my bike) and started checking the electrical wiring in her belly.

Eventually he discovered a wire that had melted in two and decided that it was the cause of her not starting. During the process we exchanged experiences with our scooters and the mechanics we had dealt with. Once he had the wiring sorted out I started the bike and she came alive again. I decided not to move on immediately and we sat beside the bike chatting for a while.

This young man (probably 30 I guess) finished his matric and was studying engineering when he became wild and got into all sorts of trouble, which he didn't elaborate on. This resulted in him being rejected by his mother and siblings. It got so bad that he ended up losing everything and spent two months living in the open in a park (sleeping there at night) and being a hobo (homeless).

I explained to him how I also lost everything I had worked for over the years and was literally down and out, from where I had started to build up my life again from scratch. I told him that I understood his hardship and pain and encouraged him to never give up - ever. He opened up to me and was a totally different person from before when he was told to go and help me with my problem. All it took was for me to genuinely show some interest in him and give him some encouragement to keep on his path of getting his life back in order.

Because of this incident I can sit in front of my computer and type out my story and look forward to a great Black Friday. I will be going past where he works today to cheer him up with a nice surprise.
Big Boy scooter Black Friday Cheer Life experiences