Trials And Tribulations With A Scooter 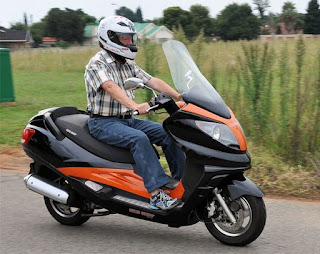 On 10 March 2012 I collected my first scooter, a Big Boy 250 cc Citiflite - it already had 2459 km on it since it was second hand. Needless to say I was elated since I love the feeling of freedom that comes from riding a motorbike. But this was a scooter and I needed to adjust to the different style of riding - smaller wheels and no clutch. The ride was much lighter than the BMW 1200 RT that I owned before and it was considerably down on power as well.

Riding my newly acquired scooter was wonderful, but it didn't take long for trouble to rear its ugly head. The first problem was with starting. Sometimes it would start and sometimes not. This situation grew worse over time until  it wouldn't start at all. Asking for advice from a motorcycle dealership wasn't helpful eithe. Recruiting a family member to service the scooter lead to another dead end. In the end it was towed away to another dealership where it spent about two weeks in the workshop - part of the problem was that it took a long time to remove all the panels just to reach all the sections that needed attention. It finally came back running beautifully except for the fan that didn't work anymore.

So it ran okay until it suddenly died again. One dealership quoted an exorbitant amount to fix it. I had to replace the battery and then it worked again. A while later the scooter started giving problems again. Whenever I pulled away it shuddered like it wanted to fall apart. Another couple of days and I got it back. It was the rollers that needed to be replaced.

Last year in December I decided to have it serviced, just in case! Well it needed a new rear wheel tyre and a new belt and I asked the mechanic to get the fan working again plus a service. A bunch of money and a few days later and the bike was "alive" again, but idling very roughly. This caused it to fall over when I turned my back to fetch my helmet. Apparently it moved forward with all the shaking that the side stand couldn't prevent it from toppling over and the left hand brake lever snapped in half. Even that cost quite a bit to replace. The mechanic disappeared and when I wanted the bike fixed he wasn't interested when I called him.

In June The scooter started dumping water from somewhere under its belly and the temperature started climbing rapidly - time for more repairs. This was the most expensive bill to date and took a month and a half to get fixed. Finally I got her back and rode home. A bit later I had to drive to a client about 5 km away. The moment I stopped at his house the bike was dead. I called the mechanic who worked on her and was told to check the fuse box. After fiddling there for a while I was mobile again until she died again at the supermarket. After that she died again 1 km from home. Needless to say I was very upset.

The mechanic told me to bring her in. So I rode slowly and got there. He opened her up and put a special paste on the contact points of the fuse next to the battery. So I rode off to visit another client and then rode home feeling good again. Today I rode to the supermarket nearby and was thinking (on the way back) that this time the scooter should be much better and that the mechanic wasn't so bad after all - WRONG! At that very moment I was about to stop at an intersection and she died again!.

I think you get good makes and you get crappy makes. Then you also get good bikes and duds that give you endless problems. With all the bucks I spent on her I could have bought a new 150 cc scooter. On the subject of mechanics - well I don't even want to go there. I have yet to find an honest mechanic.
Big Boy scooter bmw motorcycle scooter