There Be A Bad Moon Out Tonight Part 2 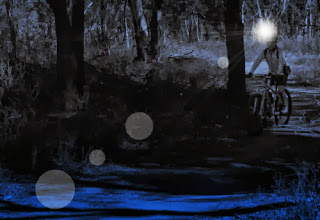 What happened next? The weak headlamp mounted on my helmet would have to do as I entered the dark, wet forest as I felt lost and alone. The silence hung in the air like the whole world had stopped to watch my next move with baited breath – only being broken by the wheels beneath me crunching on the damp earth.

As I piloted my bike along the winding track through the undergrowth I was confronted by an awesome spectacle which cannot be described by mere words. Maybe the invisible beings lurking in the darkness had pity on me for I was treated to the most unusual sight I have ever seen. A night-time garden scene like the movie Avatar seemed to play itself out before my eyes. The light on my helmet burst in all directions off the wet leaves in that forest in a surreal way, glowing with fluorescent brilliance – a virtual magical spectacle. My spirit lifted immediately giving me new strength to get the hell out of there. It felt as if I had been given a head start before those imaginary creatures would pounce.
Within the space of a hundred heart beats I finally emerged from the darkness of the undergrowth into the moonlight which had come out of hiding behind the heavy clouds. Fortunately I had done the course in the daylight and knew that there was still about three kilometres of darkness and loneliness left and then I would be home and dry.
cycling