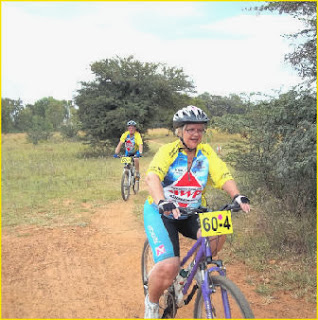 It was another lap we were engaging as Maggie and I made our way up the hill – I accompanied her for support. Having reached the top we carefully cycled down the other side as the sun tried to mop up the wet patches from the previous night’s rain.

In our team, the Spider Riders, we believed in safety and provided assistance and guidance where necessary. Teamwork and camaraderie was our motto.

Going downhill I lagged behind so that Maggie could find her own rhythm on this very technical section, encouraging her all the way. Zoom! An airborne hotshot flashed past me only touching ground here and there as he literally flew downhill. He miscalculated and, with an agonizing clunk of metal, hit Maggie’s bike from behind, both riders and bikes flew in opposite directions.

Stunned, an awkward moment of silence ensued as they tried to recover from the unexpected collision. Slowly both riders got up and looked around in disbelief, having survived the massive impact. The hotshot apologized and was off again. By then I drew up alongside Maggie who was nursing an ugly cut on her calf as she wiped off the blood. She was still shaking from the shock.

“Shall we return to the camp?” I offered, but Maggie refused and walked her bike down the hill. Then we proceeded to complete the course. No-one came to our aid since we weren’t riding in the Tour de France. It was just a race in Parys (that’s Afrikaans for Paris).


Many of the younger cyclists ride flat-out around the course, being a danger to those not able to match their lightning pace. Those guys were probably high on energy drinks or something. We always referred to them as hotshots.
cycling