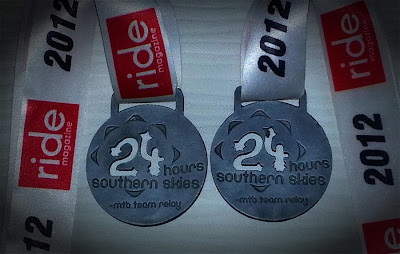 On 31 st December 2009 we collected our brand new shiny mountain bikes from a dealer in Boksburg called Cajees. I had a Scott Aspect and Maggie a Schwinn Frontier. Maggie had never owned a bike before, but she managed to ride it around the block. On her following rides she often fell but always got up and tried again. For the first month her legs were always covered with blue marks.

We cycled regularly, sometimes twice a day, and I decided to keep a logbook just for the fun of it. Sean, my son-in-law, wanted us to compete in the Southern Skies 24 Hour Race. On 1 st May 2010 we arrived at Parys totally unprepared for the event. The whole setup looked very intimidating and we soon discovered that we were totally useless on the course. It had rained heavily leaving water puddles everywhere. The conditions were treacherous for us beginners and in some places we had to battle through deep mud. Needless to say we only completed a single lap and left for home early the following day.


A lot of valuable lessons were learnt and we just rode for pleasure around our neighbourhood – I had decided to never ever expose myself to such humiliation again believing I was totally useless at it. That’s how I felt at the time. In August I developed severe discomfort and pain in my right groin which steadily grew worse. We continued to cycle because I had set myself a goal to complete 1000 km in my first year. At the end of November I finally went to see a doctor and was diagnosed with a hernia that had popped out and was causing all sorts of complications. In spite of this I completed 1000 km by the end of 2010.

The hernia was fixed in April 2011 and I took the rest of the year off to recover. My total for that year was a measly 247 kilometres.

I had missed my cycling and was determined to do much better in 2012. We upped our pace and training which enabled us to compete in the Dunblane “March Hare” Mountain Bike Challenge. Now we have a pair of magnificent medals to show for it. Very proud of them!

On Saturday 21 st April 2012 we competed in the Southern Skies 24 Hour Race in Parys for the second time. Because of proper preparation we were able to do much better. I did 6 laps and Maggie did 4. My previous feelings of incompetence vanished, being replaced by a sense of achievement. This time we had earned our medals. My total distance for 2012 was 1500 km. I felt like a conqueror.

To state the obvious, you need to prepare properly for an event otherwise you won’t enjoy it or do well. The course in Parys is set up to challenge the above average riders – or they won’t even compete. Therefore, it takes more preparation for newcomers to the sport. I felt really pleased with our performance and look forward to the next one in 2014.
cycling