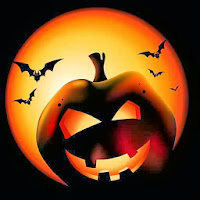 Also known as All Hallows' Eve celebrated annually on or about 31 October – 1 November. Most of what I have seen regarding this celebration has been on the television or in movies originating in Hollywood - shucks, I first spelled that wrong and had to Google it even though I have been to the place many years ago.

What I have seen is that kids normally go from house to house all dressed up in costumes trick or treating getting sweets. It looks like a huge thing states-wise, but here where I live it hasn't taken off at all. Maybe people feel safer all locked up in their houses cut off and isolated from each other. What a shame. I know they are capable of more friendly interaction in this country, but alas, it's not to be.

I have been to America and noticed how open-minded they are. My first impressions were that the people I met there were very loud, but noticed that beyond that many were very open to communicate with visitors from other countries - me! When I was in New York I went to one of the large shops to buy a gift for my wife and met a young lady there who suggested we combine our purchases that would qualify me for a discount. When I told her that I was from South Africa she asked if there really were lions roaming in our streets. I could have spun her a story about how I had to walk around with a gun on my belt every day in case one of the lions eyed me for breakfast, but decided to tell her the truth about our country - we too are civilized, although I am not too sure of that lately! This lady and her boyfriend took me out to dinner that evening and really went out of their way to be hospitable and gave me a glimpse of how wonderful Americans can be. They showed me Greenwich Village and Little Italy - lovely.

The thing that sticks in my memory is how huge and developed America is. Yes we have a biggish city called Johannesburg with a modern rail system called the Gautrain, but in America everything is gigantic. It was a lovely experience visiting cities like the Big Apple, Washington, Chicago, New Orleans, Atlanta, Dallas, Los Angeles, Las Vegas and Boston.

So thank you America. You may have Halloween, but you also have a bunch of friendly people too.
halloween